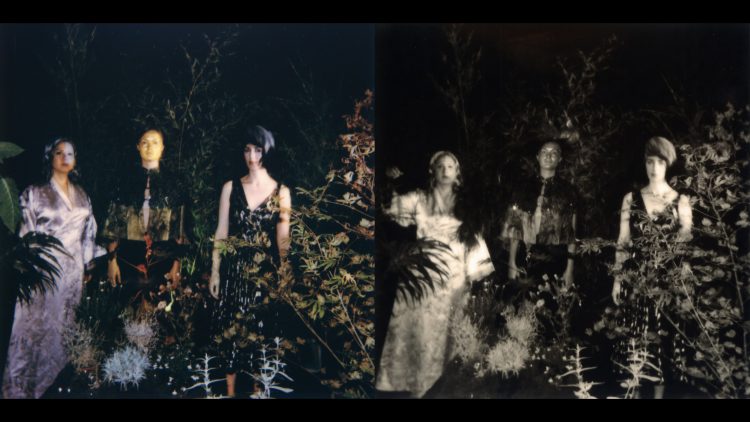 In mid-2017, Experimental Film Society (EFS) underwent a major structural transformation, evolving from a film collective into a production company. This change was a response to the need to better support increasingly ambitious projects and distribution schemes, while always remaining true to the uncompromisingly independent creative vision that has defined EFS since it was founded nearly two decades ago. The success of this move can be gauged by the flourishing of EFS activity in 2018, perhaps our strongest year so far.

My latest feature film, Phantom Islands, was completed at the start of the year. Funded by The Arts Council of Ireland under the Reel Art Scheme, it premiered at Dublin International Film Festival in February. Since then it has received twenty-two screenings in festivals and at cinemas around the world, including the Cinemateca Portuguesa (Portugal), Festival du Nouveau Cinéma (Canada), Thai Film Archive (Thailand) and Kino Meeting Point (Bosnia and Herzegovina). It won the Best Experimental Feature Film award at Istanbul International Experimental Film Festival and had an entire issue of the magazine Film Panic exclusively dedicated to its making. It has been widely written about by critics such as Adrian Martin and Fergus Daly, and in journals including Desistfilm, The Art(s) of Slow Cinema and CinePensieri. It gained mentions on several critics’ lists of the year’s best films, including noted film blogger Dennis Cooper’s.

Atoosa Pour Hosseini’s solo exhibition Kinetics in Blue opened in November at The Lab Gallery in Dublin and will run until early January. Funded by an Arts Council of Ireland project award and commissioned by The Lab and Dublin City Council, it is Pour Hosseini’s most ambitious and complex work to date. The exhibition received a highly favourable four-star review in The Irish Times and opened with a live performance by Pour Hosseini and her collaborators composer Karen Power and artist Katie O’Neill, who appears in the work. It is built around Kinetics, a new 16mm film by Pour Hosseini which will be screened independently of the exhibition in 2019. Earlier in 2018, Pour Hosseini completed another short film, Antler, also funded by the Arts Council. This premiered at the 63rd Cork Film Festival and received a special mention award at The Unforeseen Experimental Film Festival in Belgrade. Antler, like Kinetics, features sound by Karen Power.

Vicky Langan and Maximilian Le Cain’s feature Inside, which was made for the 2017 TULCA Festival of Visual Arts in Galway, had numerous international screenings in 2018. It was also exhibited at VISUAL, Carlow as part of Carlow Arts Festival where it was hailed by The Irish Times as “hypnotically watchable, offering a genuine alternative to conventional narrative and visual structures” and by RTÉ Arena as “a great film work”. Their short Play Ground (2017) was featured on a programme of recent Irish artists’ moving image work selected by MExIndex at the Irish Museum of Modern Art. Their major new collaborative work for 2018 was a performance/film, Double-Blind, created for Cork Midsummer Festival. A stand-alone film version of Double-Blind premiered at the Thai Film Archive where well-known film writer Jit Phokaew gave it an A+ rating in a review.

Le Cain also completed a major solo project this year: the six-hour feature Scorpion’s Stone, which has been four years in the making. Critic Nikola Gocić described it as “a notable milestone in the history of Experimental Film Society. Challenging on every level imaginable, formally and conceptually in particular, it could be labeled as a cinematic equivalent of ancient ruins from a parallel dimension”. It had an intimate premiere at The Guesthouse, Cork and was presented as a gallery installation at GOMA, Waterford. In my personal opinion, this masterpiece is the greatest experimental feature film in the history of Irish cinema. There are plans for further screenings next year, both in Dublin and abroad.

Jann Clavadetscher completed his first feature, Kino Hospital, in 2018. This visually dazzling meltdown of a sci-fi thriller was particularly warmly received by audiences at its premiere screening at Cork’s Triskel Christchurch Cinema and at its first Dublin screening as part of The Luminous Void Experimental Film Festival. Clavadetscher has also just put the finishing touches to an Arts Council funded 16mm short film, Underworld, which will premiere early next year.

Michael Higgins released the highly atmospheric short Ghoul in 2018. But most of his energies this year have been dedicated to working on two very promising film projects that are on track for completion in 2019.

A major event for EFS in 2018 was the first edition of The Luminous Void Experimental Film Festival, which took place at The New Theatre, Dublin. This festival was curated and organized by EFS with no funding, and was therefore a risky endeavor. We could not have foreseen the warmth of the reception that it received, with every screening almost entirely sold out and followed by richly engaged Q&A sessions. This fantastic audience response has heightened our determination to source funding and sponsorship for an expanded second edition in 2019.

It must never be forgotten that the most important aspect of sending our films to be screened worldwide is the human connections that they form. I’d like to express my deepest gratitude to all the audiences worldwide who attended our screenings and events; to all the filmmakers and artists who collaborated with us in many different capacities; and to all of our fans who supported us both in person and online. I am deeply honoured to have encountered so many amazing friends on this journey, and to have exchanged cinematic and creative ideas with such terrific people as Scott Barley, Nikola Gocić, Zulfikar Filandra, Marija Kovačina, Marko Milićević, Diego Coral López, Chris O’Neill, Ieva Balode, Philipp Ramspeck, Lichun Tseng, Daniel Fawcett & Clara Pais, Cillian Roche, Julia Gelezova, Alborz Arzpeyma, Wiwat Lertwiwatwongsa, Michael Ramos-Araizaga, and Jonatan Petré Brixel among many other valued colleagues. Without their tremendous support none of this would be worthwhile. It’s been a great year for EFS – thank you for being part of it!

We already have many exciting plans and projects underway for 2019. Happy New Year to everyone. Onwards!