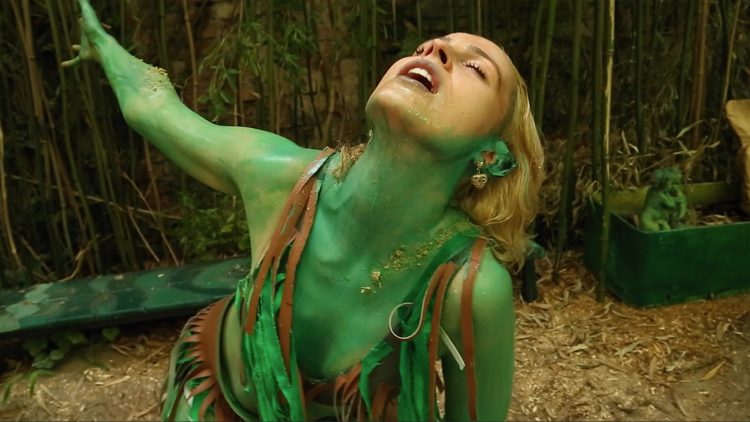 On Saturday, September 3rd at 7pm, the Experimental Film Society (EFS) will present Krampa – Expanded Cinema Version, a screening/performance by Kerstin Cmelka and Mario Mentrup at Wolf Kino, Berlin. This work connects a female version of the folkloric character Krampus with happening and performance art of the 1960s and ’70s.

The screening will include projections of the three Krampus films:

In between the projections, Kerstin and Mario will perform texts expanding the subject of Krampa. The screening will be followed by a Q&A moderated by EFS director Rouzbeh Rashidi.

In addition to the Krampus films, the following works will play on loop in the lobby/bar area, and screening room before the main screening begins:

Kerstin Cmelka met Mario Mentrup in 2014 when he worked as an actor for her video installation work Microdrama #11. After a performance in 2015, they both decided to work on a feature film, which came out in 2016, entitled The Animals. Since then, they have worked together on various performative projects and films such as Animal Exercise (2016), The Animals (2016), Im Trailerpark Der Angreifbaren (2018), Die Angreifbaren (2017-2019), Krampa Series (2021) and Shake! Mit’ochondria Salat! (2021).

Kerstin Cmelka is a filmmaker, video and performance artist, photographer, and writer based in Berlin. Her investment in different mediums is rooted in etymological thought, tracing back the literal meanings of “art” and “artists.” Art strayed from denoting performance, entertainment, and skill throughout modernity, which redirected us toward concepts of “genius” and social protest. Cmelka wants to reclaim “art” by having it encompass craftwork while rejecting false distinctions between performing and visual arts and high and low art. Instead, art should be “infinite, highly complex and extravagant.” She has been a professor for the new performance department at HFG Offenbach since 2019.

Mario Mentrup is a filmmaker, writer, director, actor, movement trainer and musician. He says he had no way out of a film studio and embraced his fate as a dramatic foil. He tests our psychological limits in his works, which are all performative to varying degrees (meaning they require bodily action, such as dancing or creating site-specific installations).

This event is part of a regular series of programmes that the Experimental Film Society (EFS) presents at Wolf Kino. EFS is one of the most radical, influential and distinctive forces in contemporary alternative cinema. It produces and promotes the work of a group of international artists and filmmakers who are linked by a dedication to personal experimental cinema. experimentalfilmsociety.com

➥  Read more about the screening and book your tickets HERE