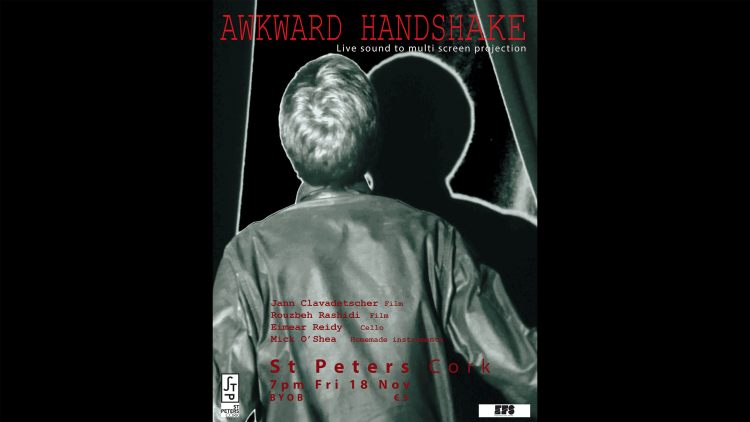 Join us in St Peter’s Cork for an evening of live video and sound art. Filmmakers Rouzbeh Rashidi and Jann Clavadetscher collaborate with sound artist Mick O’Shea and musician Eimear Reidy as they play a live score to a backdrop of 3 films being projected by 3 different projectors at the same time across the ancient walls of St Peter’s.

Rouzbeh Rashidi (born in Tehran, 1980) is an Iranian-Irish filmmaker. He has been making films since 2000, at which time he founded the Experimental Film Society in Tehran. He has always worked completely away from mainstream conceptions of filmmaking, striving to escape the stereotypes of conventional storytelling. Instead, he roots his cinematic style in a poetic interaction of image and sound. He generally eschews scriptwriting, seeing the process of making moving images as exploration rather than illustration. His work is deeply engaged with film history.

Jann Clavadetscher is a Swiss/Irish filmmaker. He became a member of Experimental Film Society in 2005 and is currently living and working in Dublin. His practice includes installation, performance, short film and feature film projects all conceived within the context of an idea of cinema. Over the past decade, Clavadetscher has created a mysterious alter ego character to inhabit this work. This figure is an explorer, a combination of location scout and cinema usher inspired by the iconic figures of silent film comedy. He appears and disappears in Clavadetscher’s films and moves through his expanded cinema installations. Clavadetscher works with a variety of formats from 35mm to CCTV camera footage and from pocket beamers to hand-cranked projectors.

Eimear Reidy is a Cork based cellist and founding member of the Irish early music ensemble The Hibernian Muse whose album, Irish Airs and the Music of Carolan was recorded and released for RTE Lyric FM in 2014. Having attained a Master’s degree in Historical performance from Utrecht Conservatorium, Eimear performs throughout Europe both as a chamber musician and soloist. Since returning to Cork in 2014 Eimear has been involved in a variety of collaborative projects and is enjoying the exploration of diverse musical practices such as improvisation, sound art and composition.

Mick O’Shea lives and works in Cork city and is a member and director of the Cork Artists Collective and The Guesthouse and has been instrumental in establishing a vibrant and growing sound art scene in Cork city. He has exhibited in UK, Germany, Poland, Lithuania, Austria, Belgium, Finland, Tasmania, USA, China and Japan. All of his works spring from his essential experience in drawing. His medium includes sculpture, drawing, sound and cooking.